Staying In The Saddle – Equanimity in Action!

You know that small voice that tells you to do something and you are afraid if you don’t do what it suggests that you will regret it? At the last minute before I mounted Checkers, the horse, I walked back into the tack room at the Miraval Resort Life in Balance Spa in Tucson, Arizona and exchanged my cowboy hat for one of their helmets.

“Look at you with a helmet! You think you are going to go down?” asked one of the other spa guests.

“I don’t think so, but I don’t want to ignore that voice in my head and then regret it later!” I replied.

So began a terrifying trail ride; one that I am happy to have survived to share the incredible silver lining stories that unfolded before me.

My horse was in the third position. The first horse, Duchess, was being ridden by one of the guides, a seasoned rider and instructor. Behind her was a spa guest who was a beginner, only having ridden on a vacation once before. I was in the third position riding Checkers, followed by two fabulous sisters speaking Farsi and English who were both beginning riders; with one more guide bringing up the rear. I consider myself a beginner, even though I have ridden on trail rides with my family when my kids were younger. It has been 15 years since I have been on a horse. Cut now to present tense and come with me on this mini “movie.” 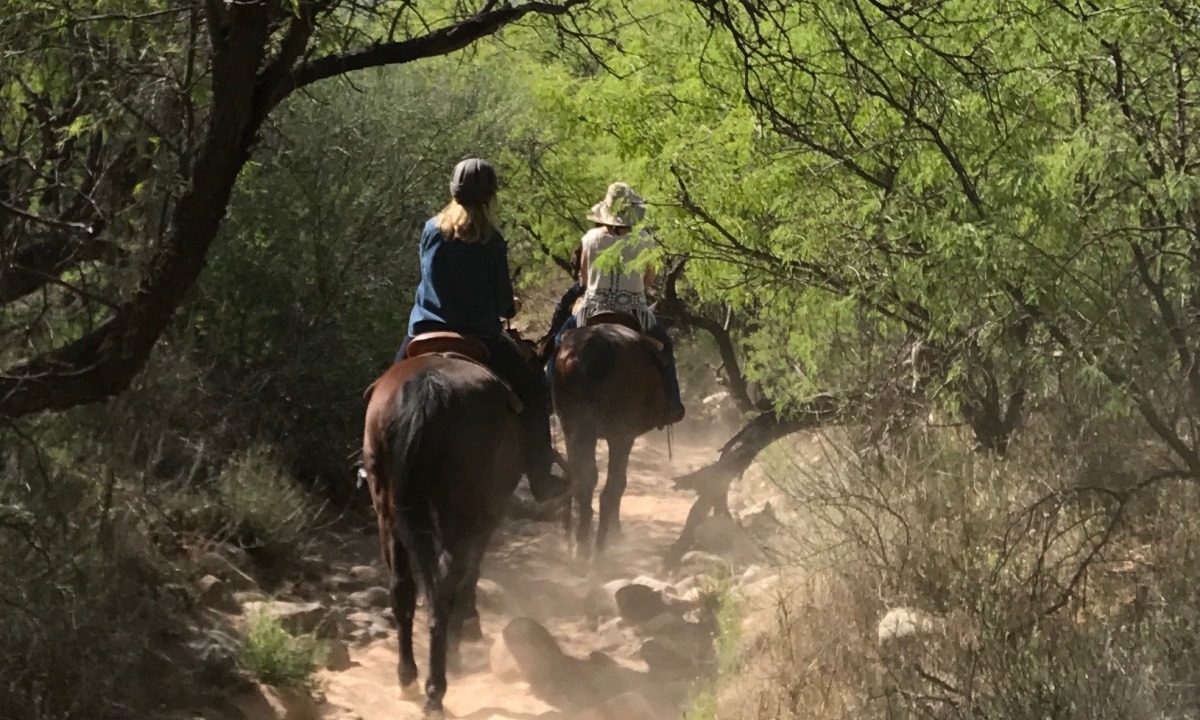 The path is super narrow. There are rocks and cactus and bushes making walls on both sides of the trail. We are single file with no room to move. All of a sudden, Duchess (the lead horse with the guide) starts rearing and trying to back up. The guide was forcefully steering her straight ahead and kicking her to get her to comply. We all had to stop so that we didn’t rear-end each other. When Duchess calmed down, the guide explained that Duchess had seen deer up ahead on the ridge and it had scared her. At this point I’m thinking, great, I can’t get out of this line, and the lead horse is not stable.

I’m careful to make my body relaxed and heavy in the saddle. I make note of my breathing, feeling my body breathing in and out.

Three minutes later it happened again. This time Duchess took longer to get under control. And then almost immediately Duchess went wild! She was rearing up. She was backing up and stepping sideways. The guide was desperately trying to keep her from turning all the way around and charging into us. She was kicking the horse’s flanks, all the while the horse was dancing sideways in reverse. At one point the horse that was second in line got past Duchess and moved up out of the way. That left me, on Checkers, in the line of fire.

Everything went into slow motion as I saw her crazy horse eyes and enormous horse rear end skidding into me, and Checkers. The whole time I was sitting still in my saddle, holding firm to the reins while repeating “staying calm, staying calm” over and over loud enough for Checkers to hear me. Seeing Checkers remaining calm worked magic on Duchess. She eventually calmed down enough so that we could continue to walk forward, with the spa guest who was in position two now in the lead. Eventually, we came to a clearing where we could all fan out and regroup.

The guide said, “Wow, that was really scary. Is everyone okay?” Everyone in the group commented on how well I handled the horse and the situation.

I said, “Thank you, but actually I’m not okay. I was freaking out inside.”

She suggested I talk about it; she said it would help. So this is what came out of my mouth:

“When I was 8 or 9 years old at day camp, I was riding back into the corral with all the other campers. We were supposed to go two by two, with the first two riders splitting right and left inside the corral and taking the first spot on each side. Instead, the kids went straight and all the horses followed them straight ahead causing a jam up of horses and kids. My horse got kicked and reared up, throwing me to the ground. They carried me to the infirmary and put a blow up splint on my leg that went from my ankle to my hip. My dad had to leave work to pick me up and take me to the hospital for x-rays. They thought I might have broken my hip. I didn’t get back on a horse again for 25 years. When I saw Duchess’ crazy eyes and her big back end swinging towards me, I thought, ‘fuck me, I can’t believe this is happening again. Get low and solid. Glad I have a helmet on. Stay calm. Stay on.’”

The amazing thing about that memory and the feelings attached to it rushing out of my mouth is that I wasn’t thinking about what I was about to say. More amazing still is that I haven’t thought of the summer camp event in at least 40 years, and if you asked me about it now, I would not have considered it to be traumatic.

Later that afternoon, I was in a floating meditation class at the Spa. I was suspended in the air in a cocoon of fabric that was hanging from the ceiling. The meditation teacher was leading us in a guided meditation, periodically giving each cocoon a gentle swing while tapping the crystal bowels with a drumstick making different bonging sounds. You could hear the birds chirping outside, the quiet music, and an occasional snore from a neighbor cocoon. Instead of blissing out right away, I was in a dialogue with my mind. Flash backs of crazy eye huge ass Duchess were playing behind my eyelids. I was telling myself to cut it out, I would attend to that later, that it must have actually been traumatic, and to get back to my breath and this cocoon in this room right here, right now. My inner voice won the struggle and I enjoyed a fabulous meditation floating in that beautiful room.

An hour later though, I laid down for a nap and the flashbacks returned. I acknowledged them, thinking, “Oh, this is trauma. Sorry that happened to you today sweetheart. You did an awesome job keeping yourself and your horse together. What do you need to hear right now?” Then I placed my hand on my heart, which I find soothing and told myself I was safe and sound. I then changed the channel in my mind to replay the meditation in the hanging cocoon. It didn’t work to put me to sleep but it did interrupt the negative discursive loop of flashbacks. That technique is called R.A.I.N. Recognize you are having the feeling and name it. Allow it to be there. Investigate gently the where and why of it in your body. Nourish yourself with finding out what you need to make yourself feel soothed.

The next day I sat down with Charlie, the assistant manager, to share the horse back riding event. I wanted him to know that I did not want a refund of the fee, rather I wanted him to hear what went on, and suggested that Duchess be taken out of trail riding circulation. The assistant manager was a young man, 26 years old, but he had the poise and maturity of a much older person. He was thoroughly apologetic, “You are not supposed to suffer a trauma at the spa!” and immediately offered to see whether the trauma specialist had any time open for a private session, which would be paid for by the Spa.

I had the most incredible experience with the trauma specialist, Brent Baum. He developed a modality called Holographic Memory Resolution (HMR). He took me back to the millisecond before the trauma, and we reframed the event using somatic psychology, color psychology and energy psychology. We recorded the session on my cell phone, so that I can refer to it later to understand what the heck went on while my body was feeling the heat of his hand on the back of my neck, and I was recalling long forgotten memories that had left little remnants of constrictions in various locations in my body. He assured me that my flashbacks would return no more, and he was correct! For more information on this relatively new healing modality, go to www.HealingDimensions.com. Full disclosure, there is not much in the way of evidence based research showing the efficacy of this modality yet. Baum wrote a book entitled “Surviving Trauma School Earth,” and has written articles you can find on his website.

Baum said the trauma that occurred on the trail ride at Miraval triggered the trauma that I suffered being tossed off the horse at summer camp as a little girl. I changed the narrative in both memories, while in a very relaxed bodily state, and surrounded each memory with a picture frame that I visualized in a specific color that I then imagined breathing through my entire body. He suggested I continue to imagine breathing that color through my body a couple more times the following day. 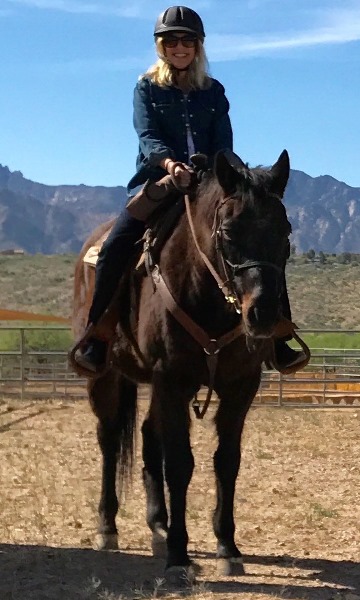 Baum said it was my mindfulness and meditation practice that allowed me to see the events on the horse as they unfolded in slow motion, while monitoring my internal bodily sensations and at the same time being super present in the saddle on my horse. Thank God for my practice. I always tell my students that this work is dose dependant. You need to practice daily, even if you think you don’t need it, so that it will be there when you need it the most!

The following day I ran into the fabulous Farsi sisters in the café. They said they couldn’t get over how astounding it was to watch me manage the situation on the trail. I wish I could have witnessed it from their vantage point and point of view. Although if it had not have been me, Buddha-like still on Checkers, who knows how it would have ended.

It was my practice that saved the day!